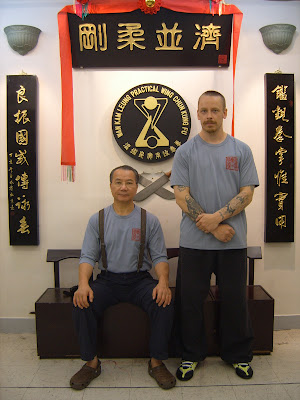 5 centre line theory:
1: The first centreline is the median plane also known as the vertical plane that divides the body into right and left halves. This line has many purposes in Practical Wing Chun ie: to keep a frontal position as a base, but also to keep the elbow on this line as a base.

2: The second centreline runs through both your elbows in the horizontal (transverse) planes, which are parallel to the floor. It defines the height of the elbow in most defensive upper level arm positions. From this position your hand should be able to cover both mid and upper level, without moving the elbow. The easiest way to absorb an oncoming force, is when the elbow is on this line and the arm is in an angle of 135 degrees,

3: The third centreline is on the middle of your forearm, if you include your fist in your forearm definition. Put your ring finger on the middle knuckle and the thumb as far down the forearm as possible, then the thumb reaches the third centreline. If you keep your arm bent at the elbow at 135-degrees in bong-sau, this should be the area of your arm that crosses the first centreline for alignment and maximum power/counter options.

4: The forth centreline intersects the distance between you and your opponent, when they are in reach of your punch. Knowing this distance is extremely important for the perfect reach of both attack and defence.

5: The fifth centreline is a vertical plane which passes through the body side on. This is the same line as defined in the frontal plane. Your body is most balanced and most stable when the ear, middle of your shoulder and hip are on the same straight vertical line, running through your centre of gravity.


Practical Wing Chun Posture:
Natural alignment is a important consideration when training Practical Wing Chun. It is the position in which the spine is best equipped to deal with external stress and strain, so it is the strongest, safest and most mobile position when fighting.
The ability to assume and maintain neutral alignment is an important neuromuscular skill that comes with repeated practice. It requires static and dynamic balance and coordination as well as muscular balance in all aspects of the training. Habitual postures also influence a students kinesthetic awareness, or their ability to know where their body is in space without looking. For example, many students stand with pelvic tilt, their head forward and chest collapsed. This needs to be corrected early on in the students training cycle


Punching Theory:
In Practical Wing Chun there are many different kinds of punching. We usually train 7 different punches on the wall back, but no hook. Our most common punch is the mai-jarn punch, where the elbow is kept on the centre line, so the arm covers the centre while punching and has the ability to slide in. The hand is kept at an angle, so you punch with the knuckles and not the fingers.
In Practical Wing Chun you don’t hold back your shoulder when you attack or defend. Most of the power of the punch comes from the shoulder, similar to Western Boxing.

You have to be very relaxed in every movement, because all power you apply is generated effortlessly. In Practical Wing Chun you don’t straighten your arm when you punch. Some people say, that you hold back power if you do not straighten the arm, but they do not understand the principles behind it.

Here are 5 reasons why we do not straighten the elbow in the punch.

1. If you straighten the arm, there is no angle for simultaneous attacks and defence, when your opponent attacks on the inside

2. If you straighten the arm, the recoil effect doesn’t go to the ground

3. If you straighten the arm, the elbow is exposed for joint manipulations

4. If you straighten the arm, you often hit on the wrong distance. There is therefore no power behind the punch

5. If you straighten the arm, you will have to change the angle of the elbow to defend (change tool)
"Kun mä katson näitä mun käsiä, niin mä ymmärrän että jonkin suuremman asian instrumentteja ne on."